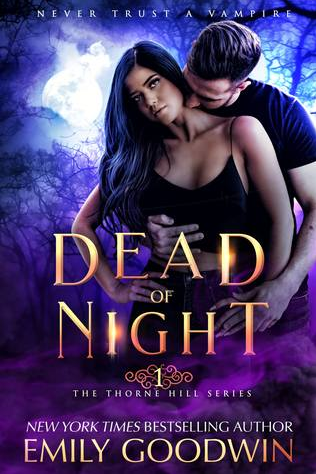 I might have learned that lesson the hard way. But when I find myself in a vampire-owned bar, I don’t have much of a choice. With vampires still trying to assimilate into mainstream society, I’ve done Lucas King a favor by stopping one of his patrons from draining a human dry in the basement of his bar. A favor he’d prefer to repay in bed than in kind.

Vampires and witches have had more than a jaded history, and when witches start showing up dead in surrounding covens, all signs point to something old and powerful. Something that knows the ways of the witches.

What’s worse than trusting a vampire? Falling in love with one.

Well tickle my spellbinding fancy, wow. I was beyond ecstatic to find out one of my personal favorite authors was venturing into PNR world, because why not? It is such a fun genre, one that I am quite new to considering I haven’t stepped foot into this genre since back in the Sookie Stackhouse days and Twilight left me unsatisfied in continuing the YA Paranormal world genre. However, recently I am finding myself more and more in the PNR more geared towards the adult audience and by golly I am in love.

Let me start by saying that I obsess over Emily Goodwin’s writing style – she has me gushing on the floors, melting with the swoonage or chuckling like a mad banshee with her character antics, and lets not forget the waterfall of tears she can bestow on me. She is just a phenomenal writer in the New Adult Romance world, at least for me. So again, it is a no brainer I would follow her adventure into the PNR with Dead of Night.

Why wouldn’t I follow, the characters were absolute perfection. Callie reminded me a lot of a blend between the Sabrina in The Chilling Adventures of Sabrina, hint of Sookie and a dash of something fresh. I loved her personality. Not only was she a force to be reckoned with, but ultimately she was a true, strong willed heroine. She was her own person, she made her own mind up and all the while she was actually extremely powerful. Some of the scenes with her, Callie sent chills down my back. She definitely did not play damsel lightly…

Though when it was time to be a damsel, Lucas was there to protect. oh my lanta, what can I say about Lucas that won’t make me drool? I adored him the second his character was introduced. He had this menacing sex appeal that was just demanding to be licked. I mean it ladies, he was a vampire of many layers and watching Callie peel away the edges was utterly torturous and satisfying all at the same time. Lucas was just this sexy, alpha vamp who was absolute gem. There, I admitted it.

And even though I will admit that between the story line and the romance, the plot was a lot more tame-ish than I would have expected a PNR to be, it was very sweet and gentle in certain aspects of the build but where the gentle ended was when the passion between Callie and Lucas lit up the pages. Again, I am new to the genre myself, I like things to be light, I like things to be dark, I can take any angle willing its way towards me, so even with this being the more gentler side of the paranormal world, the romance was panty melting. There was such a powerful chemistry that really dominated both characters towards one another, it was instant in the most perfect of ways. The bickering, the jokes, the overall mental connection these two shared was just magical.

Obviously I cannot get away without mentioning some interesting supporting characters – because, well why not? I loved Callie’s familiars. I also enjoyed the snippets of backstory that tied this crazy cat lady into a charming minx. Binx was definitely a cute favorite, personally. And between the family drama with Callie and her Coven of witching besties, it was just jammed pack with some interesting dynamics that just flowed nicely with the main characters and the plot definitely. Eliza especially made me chuckle, every time I couldn’t help but pick up on this Pamela TruBlood vibe and I flipping loved it.

Bottom line, I obviously thoroughly enjoyed Dead of Night. It was fun, clever, sexy, and deviously charming. I could not get over the chemistry between Lucas and Callie, they were both drop dead scrumptious from the start. Not only was the romance absolutely melt off your seat gooey, the plot was especially intriguing. It was jammed pack with great build that overall made this such an entertaining read. Between the romance (again, delicious) to the secondary characters, the political undertones and the spell entrancing action-packed plot, it was great. Cannot wait to see what comes next…