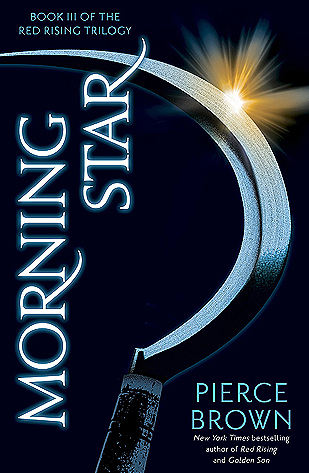 Red Rising thrilled readers and announced the presence of a talented new author. Golden Son changed the game and took the story of Darrow to the next level. Now comes the exhilarating conclusion to the Red Rising Trilogy: Morning Star.

Darrow would have lived in peace, but his enemies brought him war. The Gold overlords demanded his obedience, hanged his wife, and enslaved his people. But Darrow is determined to fight back. Risking everything to transform himself and breach Gold society, Darrow has battled to survive the cutthroat rivalries that breed Society’s mightiest warriors, climbed the ranks, and waited patiently to unleash the revolution that will tear the hierarchy apart from within.

Finally, the time has come.

But devotion to honor and hunger for vengeance run deep on both sides. Darrow and his comrades-in-arms face powerful enemies without scruple or mercy. Among them are some Darrow once considered friends. To win, Darrow will need to inspire those shackled in darkness to break their chains, unmake the world their cruel masters have built, and claim a destiny too long denied—and too glorious to surrender.

I said it before and I will say it again… this was one of the best science fiction dystopian series I have read, and it is by far my favorites. Everything from the world building, the setup of the atmosphere, it’s backbone, the characters depths and dynamics; seriously I cannot get enough of it comrades, I fucking loved it.

There was just so much death… so much corruption. My emotions ran rampant with Morning Son. I was a hot mess of tears puddled at my feet and screaming at the book that I was fiercely considering my mental stability. I was dreadfully scared to finish this, I knew that I shouldn’t get comfortable, that something was going to happen that would would leave a punch in my gut, I wasn’t prepared in the least.

Darrow has officially lived the reins to his dubbed name The Reaper. The depths of the darker corners of his mind, his circle; at the beginning my heart was pounding. So much corruption, the deception is beyond anything I could wrap my mind around, some corners I had to reread because I had more questions that left me so conflicted. Between the betrayal, war, battles, romance – it was just a whirlwind of twists, my head was spinning.

And oh my lanta, that bromance! Sevro and Darrow really hit a head in Morning Star, one that needed to happen. After the many downfalls of what occurred since book one, I think it needed to happen. I do not want to give too much away, but it was just such a powerful scene, hell just everything leading up to that moment was such a key element to the entire series that made everything worth it.

That ending…. sweet baby Jesus, I was not expecting that ending. My heart is still pounding, my stomach is still in my throat, and my hands are shaking furiously. The ending is JUST how I pictured it but without knowing it would happen. I was beyond floored.

Bottom line, I cannot recommend this series enough. It is hardcore book boner strong of emotions for me. I loved it, I hated it, I was left wanting and yet satisfied. Pierce Brown has me hooked like a crack head and I need more of his delicious creativity. What I loved most about this series, and I have said it before is the entire atmosphere of the characters and the world. The caste system, the dynamics, no character is one-dimensional – it was absolutely, catastrophically phenomenal.

Get Red Rising, get it now so we can fangirl together comrades!