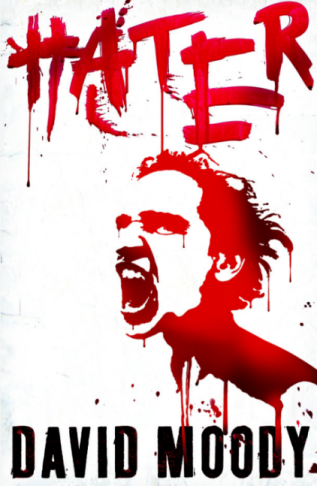 Society is rocked by a sudden increase in the number of violent assaults on individuals. Christened “Haters” by the media, the attackers strike without warning, killing all who cross their path.

As a hundred random attacks become a thousand, then hundreds of thousands, it soon becomes clear that everyone, irrespective of race, class, or any other difference, has the potential to become a victim – or a Hater.

People are afraid to go to work, afraid to leave their homes, and, increasingly, afraid that at any moment their friends, even their closest family could turn on them with ultra-violent intent. Waking up each morning, no matter how well defended, everyone must now consider the fact that by the end of the day, they might be dead. Or became a killer themselves. As the status quo shifts, “ATTACK FIRST, ASK QUESTIONS LATER” becomes the order of the day… only the answers might be far different than what you expect…

in the tradition of H.G. Wells and Richard Matheson, Hater is one man’s story of his place in the world gone mad – a world infected with fear, violence, and HATE.

I am a sucker for all things end of the world scenarios. I watch just about any zombie movie in creation, read any fiction that revolves around the apocalypse because for whatever reason I have a disturbing fascination with humanity crumbling. When I first came across Hater, I quickly realized a couple of things. For starters, this isn’t zombies, which makes it a bit of a twist and secondly it is a series – a glorious series of brutality, malicious, vicious cruelty of survival of the fittest. Oh be still my dark, corrupted speckled heart.

So why? Why is this so kickass to me? What does Hater have that separates it from others amongst the many greatness that is the end of the world? Well I am getting to that… hold on my furry friends.

First things first, this is definitely one of my favorite series in this particular genre. There I said it, I put that out there – I am a fan of it. I understand what you might be thinking too, hell I am thinking it too – it is the end of the world, people die, people kill each other, whether it is zombies or some crazy science fiction aspect that turns people crazy, there isn’t much more to develop anything to reinvent this overplayed plot. They are generally all the same, and yet they aren’t. Yes, every author or director may have the backbone of the same premise, the same overall outcome  to certain points but what they do differently is their writing style to create something on their terms, more expanding… and that my comrades is why I love David Moody so much.

He is my wet dream fantasy in a swarming world that needs to crumble in despair for just one more twist to the apocalypse genre.

It is his writing style point blank. The world building for Hater is a slow fall, tension building formula that barrels through. At the beginning we meet out protagonist, Danny McCoyne, who is your everyday man – goes to a job he hates, home to a family he loves trying to support them; the usual bullshit you hate about adulting. Everything is as it should until things really aren’t. Day by day, people are changing. One by one, people are attacking other people, not just violence but literally murdering people in the streets. It isn’t until Danny thinks things cannot get worse for his family, they quickly realize what it happening, you are either a Hater or not. You kill or be killed. Securing themselves to watch the terror unravel, praying they are safe on the inside, trying to survive what looks like the world ending.

It quickly spirals into a multitude of questions for the reader; who is a Hater? How is this determined and how do they know? How does it spread? It is that whirlwind chill that runs down your back as a reader; they do not know until it happens and when it does, someone will die.

…So which side are you?

Without giving away too much detail I will share a few tidbits. Haters are people, there are no zombies, this isn’t flesh eating disease, nothing after them damn brains. The terror is that something just switches inside – a rage. You could probably compare to maybe rabies, but there are no bites. It is legitimate mindless brutality. It is disturbingly creepy what occurs for our hero Danny and his world.

Bottom line, I cannot express any further how much I thoroughly enjoyed Hater. It was bone chilling, gut wrenching, gruesomely delicious. I do not think there was a moment where I was not completely sweating at the palms waiting to see what was happening next, or rather who would be next. Phenomenal. I personally loved the slow build. It made the climatic moments more fearful for the characters. If you are like me and enjoy this, where all hell falls on earth and it is a gorydamn blood bath – this is definitely up your alley. The build is definitely worth every moment that I turned the page, the thunder in my ears of uncertainty was overwhelming – I couldn’t stop reading, I won’t stop reading.